Today, my husband watched my son (one of many times he has done this for me) while I finished the final draft of my first novel. And, amazingly, at the end of my writing session, I decided: It’s done. It’s ready.

One caveat: I am having someone else look at it for small things and copy edits, but other than that, I’m calling it. No more tweaking, people! Hands off!

This has been about two years in the making, and during the second year I experienced a lot of changes in my life, including having a precious baby boy! One of my biggest fears about becoming a mother was losing myself and losing my writing. And so, I have clung to it tooth and nail, making sure that my writing didn’t become lost.

And I had a lot of help.

My husband watches my son often so I can write. My mom even watched him once so I could get some time in. I’ve learned to use naps and even, in the newborn stages, nursing time as writing time. Because I have had to be so intentional about making writing a priority, I think it has instilled good writing habits in me. My husband even made the comment once that I actually seem to write more now that I am a mom.

I don’t think this is far from the truth. While I was still on maternity leave, I entered and got first place in a creative nonfiction contest. In October, when my son got to celebrate his first Halloween, I got to celebrate my publication in McSweeney’s Internet Tendency, a fiction article I wrote during a lunch break at work.

My son has done nothing but enrich my life in a million ways since he has come into the world. He’s made me more efficient and compassionate and appreciative of so many things that I used to take for granted. And the restrictions on my time have bolstered my resolve to hold on to the things that are important to me.

Not long ago, I attended a writer’s event where someone made a comment to the effect of “So, I guess you’ll be writing again in about 18 years, huh?” and I was horrified at the implication. Who would give up their passion just because they had a child? What kind of example does that give to a child when their mother obsesses only over them and has no interests of her own?

“No, I’m still writing,” I said to the dubious writer, and went on to give a few of the ways I found time to write.

Is my house kind of dirty a lot of the time? Sure. Does my husband cook a lot of (okay all of) the time? Yep. But am I happy and following my dreams? Yes.

Anyway, all this is to say that it has been a big year. And because of that, I haven’t written in this blog often, because I couldn’t justify spending time writing a blog post when I could be using that precious time to work on my book.

But I finished the book :).

Here’s the final shakedown of the numbers for this bad boy. For those friends who have been asking me about it every now and then, maybe you will understand now why it has taken so long, because, I’ve realized, I almost have enough pages/words for two books I think. 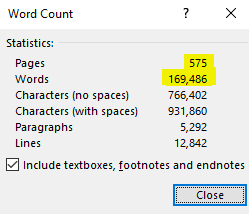 This puppy is big. It’s so big that during the last few months, Microsoft Word has had enough of my antics and is “not responding” for a few seconds every time I try to save it. Pssh. It’ll forgive me soon, I know.

Thanks for reading. Here’s to finding an agent, pursuing the next steps, and getting to work on other writing projects!